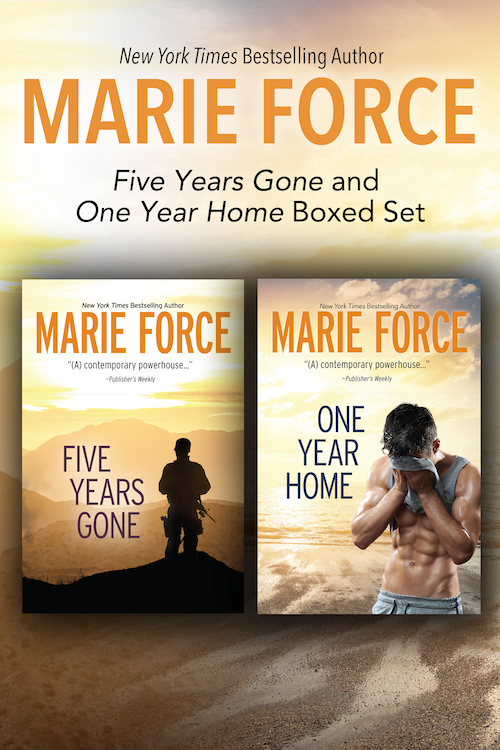 The most brazen terrorist attack in history. A country bent on revenge. A love affair cut short. A broken heart that never truly heals.

I knew on the day of the attack that our lives were changed forever. What I didn’t know then was that I’d never see John again after he deployed. One day he was living with me, sleeping next to me, making plans with me. The next day he was gone. That was five years ago. The world has moved on from that awful day, but I’m stuck in my own personal hell, waiting for a man who may be dead for all I know. At my sister’s wedding, I meet Eric, the brother of the groom, and my heart comes alive once again.

The world is riveted by the capture of the terrorist mastermind, brought down by U.S. Special Forces in a daring raid. Now I’m trapped between hoping I’ll hear from John and fearing what’ll become of my new life with Eric if I do. From a New York Times bestselling author, Five Years Gone, is an epic story of love, honor, duty, unbearable choices and impossible dilemmas. When you finish Five Years Gone, make sure you read the sequel, One Year Home.

I have no idea how to survive without my beloved Ava. She had no choice but to move on with her life during my six-year deployment and has now married Eric. I hate him for taking her from me. I’d prefer to wallow in my depression and heartbreak, but the whole damned world wants a piece of the SEAL Team leader who helped capture the world’s most-wanted terrorist. I need help handling the relentless requests, and when Ava sends her new sister-in-law to manage the media circus for me, I’m prepared to hate her on principle. Her brother took my Ava. What else do I need to know about her?

It takes five seconds to realize Ava’s ex will be the most complicated and difficult client I’ve ever had, but the opportunity to represent the most celebrated man in the world could make my career. I’m determined to do the job, even if I dislike John from the moment I meet him. And I like everyone. So much so that my brothers worry about me being exploited by those who would take advantage of my unwavering love for others. But John… He’s in a class by himself, and his bitterness is a festering wound that I begin to wish I could somehow fix for him. The more time we spend together, the more our mutual disdain morphs into something that feels an awful lot like desire. There’s no way I can want this man, or so I tell myself, and when Eric finds out I’ve developed feelings for the man causing trouble in his new marriage, well… That’s going to be a hot mess.

“I will never be the same after reading this book.” —5 stars from As You Wish Reviews