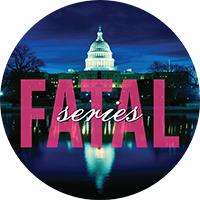 Cranky, hot and in bad need of a shower after a long day working a crime scene in the broiling sun, Metro PD Homicide Lieutenant Sam Holland tossed her handcuffs and badge on the bed she shared with her husband, Vice President Nick Cappuano. The man himself happened to be stretched out on his side of the bed, fresh from the shower. He wore only a pair of gym shorts that left his extraordinarily beautiful man chest and washboard abs on full display, and the view of her smoking hot husband went a long way toward diffusing her bad mood.
While she dug the key to her bedside table out of her pocket, he reached for the cuffs and twirled them around on his index finger. “These bring back memories of the first week we were back together. Remember?”
“Of course I remember the first week we were back together, but I can’t seem to recall how the cuffs were involved.” Six years after a memorable one-night stand, finding him in the apartment of his murdered boss had been a lovely surprise during an otherwise dreadful day.
She used the key to open the drawer where she kept her service weapon, cuffs and badge when she was off duty. After stowing the badge and weapon, she held out her hand for the cuffs.
“Maybe we could keep these out for a while.”
“What for?”
“Let me refresh your memory… We were in the hospital after your crazy ex-husband tried to blow us up. I’m sure you remember how you were so concerned about me butting into your case, as a lowly civilian, that you handcuffed me to the hospital bed.”
Sam shifted her weight from one foot to the other as the memories of that insane day came rushing back to remind her of something he’d said as they left the hospital: “You owe me twenty-six minutes in handcuffs, and I fully intend to collect.”
He raised a brow that only made him sexier if that was even possible. “Is it coming back to you now?”
She looked away because she sucked at lying to him. “Vaguely.”
He laughed. “Liar. You know exactly what I’m talking about, and tonight would be an excellent night for me to settle the score with my sexy cop, seeing as our boy is spending the night with his grandparents, which means half the usual Secret Service contingent is also down the street.”
Their son, Scotty, had gone to Sam’s dad’s house to watch the latest Marvel video and planned to spend the night there.
Still twirling the cuffs around on his finger, he said, “Meet me in the loft at nine sharp. Don’t keep me waiting or I’ll have to add time to the clock. I’m already thinking of all the things we can do in twenty-six minutes…”
“Those cuffs are the official property of the MPD,” she said in her best cop voice, which did nothing to intimidate him.
“Shall I borrow a pair from the Secret Service? Of course then I’d probably have to tell them why I needed them…”
“Fine! Keep the cuffs! Have your fun.”
“Oh I intend to, my love. You can count on that.”